Belgium and the United Nations: a historical perspective 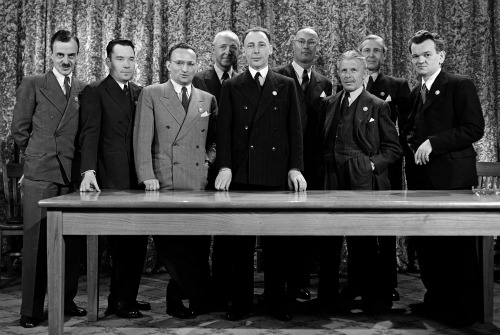 In the spring of 1945, Belgian diplomats were present for the drafting of the original Charter of the United Nations in San Francisco. On the 26th of June, Belgium officially joined the Organization along with fifty other founding members.

The First Session of the General Assembly was held in London in 1946 where two Ministers of Foreign Affairs competed for the chairmanship of this noble hemicycle: the Norwegian Trygve Halvdan Lie and former Belgian Prime Minister Paul-Henri Spaak. In the end, our candidate was elected as the first President of the General Assembly and Lie was named Secretary-General.

In the autumn of 1946, during its Second Session at Flushing Meadows in Queens, the General Assembly chose New York as the permanent seat of the Organisation. Three years later, its headquarters were built on the Manhattan bank of the East River. The design of the building complex was assigned to an international team of eleven renowned architects, working under the supervision of the American Wallace K. Harrison, and including Le Corbusier (France-Switzerland), Oskar Niemeyer (Brazil) and the Belgian Gaston Brunfaut.

As a sign of its ambition, Belgium was elected for the first time as a non-permanent member of the Security Council already in 1947. To date, Belgium has filled this seat on six occasions: in 1947-48, in 1955-56, in 1971-72, in 1991-92, in 2007-08 and in 2019-20. Over the course of these years, the Permanent Representatives Fernand Vanlangenhove, Edouard Longerstaey, Paul Noterdaeme, Johan Verbeke, Jan Grauls and Marc Pecsteen de Buytswerve all had the honour of chairing the Council.

Today, Belgium pays 0.82% of the UN budget and ranks 18th in the list of contributors (combining the regular budget, peacekeeping operations and International Tribunals). Beyond these mandatory contributions, the Belgian Development Cooperation is known for its consistent core funding of UN organizations and assigns at least 50% of its aid to least developed countries (LDCs).

Belgium has been involved in peacekeeping operations (PKO’s) since 1948. Our first intervention in Kashmir (1949) was followed by a large operation in Korea (1950). In the following decades, Belgium would not partake in any PKO’s until the operations in Somalia (UNOSOM), in the former Yugoslavia (UNPROFOR/UNTAES), and in Rwanda (UNAMIR) in the 1990’s. In Rwanda, ten Belgian blue helmets were killed, which led to a temporary hold on Belgium’s participation in peacekeeping operations. In recent years, the Belgian military has deployed blue helmets in Sudan (UNMIS), Lebanon (UNIFIL), the Middle East (UNTSO), DRC (MONUSCO) and Mali (MINUSMA). They have also been dispatched as part of UN-mandated coalitions such as ISAF in Afghanistan. When participating in peacekeeping missions, Belgium lays the focus on excellence. The limited size of our armed forces means we cannot send large contingents everywhere. However, by providing strategic medical and aerial capabilities as well as by assuming command, observation and liaison duties, we endeavour all the same to respond whenever possible to crisis situations in the world’s hot spots. In recent years we have made more use of civil tools (police, civil protection, courts) for crisis management.

Multilateralism being part of our diplomatic DNA, Belgians have never hesitated to take up responsibilities within the UN family., Throughout its history, our compatriots chaired different committees at the General Assembly: the First Committee, responsible for Disarmament (F. Vanlangenhove - 1950s); the Second Committee, responsible for Economic and Financial matters (P.A. Forthomme - 1965); the Sixth Committee, responsible for Legal matters (E. Suy - 1972); and - apparently being fond of numbers - the Fifth Committee, responsible for Administrative and budgetary matters, on three separate occasions (A.X. Pirson - 1979, A. Teirlinck - 1994, A. Mernier - 1998). In the context of ECOSOC, Ambassador Olivier Belle chaired the Commission for the Status of Women for two years (2007 - 2009). In the Secretariat, Professor Eric Suy occupied the position of Under-Secretary-General for Legal Affairs and United Nations Legal Counsel and was subsequently Director-General of the UN Office in Geneva (1974 - 1987). Other noteworthy compatriots in the UN system include former Belgian Minister Michel Hansenne (Director-General of the International Labour Organisation from 1989 to 1999), Peter Piot, M.D. (first UNAIDS Executive Director, from 1995 to 2008) and Ambassador Johan Verbeke, Special Representative of the Secretary-General for Georgia (2009).

Today, a number of Belgians fulfil high-profile functions in the UN-system:

Former Minister of Belgium and Vice-President of the European Parliament Isabelle Durant currently serves as Deputy Secretary-General of the Conference on Trade and Development (UNCTAD) in Geneva.

On 22 May 2019, Mr. Philippe Gautier was elected Registrar of the Court for a term of seven years, effective 1 August 2019, he follows in the footsteps of another Belgian, Philippe Couvreur, who served as ICJ Registrar from 2000 until 2019.

Professor Olivier De Schutter served as Special Rapporteur on the Right to Food at the Human Rights Council from 2008 until 2015 and as an independent expert on the Committee on Economic, Social and Cultural Rights (CESCR). He was appointed as the UN Special Rapporteur on extreme poverty and human rights by the Human Rights Council at its 43rd session, in March 2020.

Professor Ludovic Hennebel was elected by ECOSOC to serve on the Committee on Economic, Social and Cultural Rights for a term until the end of 2022.

Benoit Van Keirsbilck is the first Belgian to be elected as a member of the United Nations Committee on the Rights of the Child (CRC), he serves for a term from 1 March 2021 until 28 February 2025.

Former President of the Constitutional Court of Belgium, Professor Marc Bossuyt, serves until the end of 2021 as an independent expert of the Committee on the Elimination of Racial Discrimination (CERD).

Since 2009, Daniel Fransen serves as an International Judge (Pre-Trial Judge) at the Special Tribunal for Lebanon.

Judge Christine Van den Wyngaert served on the Tribunal for ex-Yugoslavia before becoming Judge at the International Criminal Court between 2009 and 2018.

Professor Jean-Pascal van Ypersele was actively involved with the work of the Intergovernmental Panel on Climate Change (IPCC) from 1995 until 2015 and served as vice-chair of the Panel.